KALIWANAGAN is a city that never sleeps.

KALIWANAGAN is a city with glamor, gold, glitz, charm, smiles, and hearts, and

KALIWANAGAN is a city with crime, injustice, beasts, claws, blood, and metal.

Will you tame it, will you observe it, or will you let it loose?

KALIWANAGAN is a rules-light game that uses 2d7 (or 3d6 if you do not have any sort of way to roll that die), suitable for group play but also for solo and co-op play as well.

Take note that this isn't playtested yet, so feedback is greatly appreciated.

Cover and banner photo created by myself using Paint.net.

KALIWANAGAN is made for Cyberpunk by Asian Creators Game Jam and The Gatsby Jam.

KALIWANAGAN is licensed under the Creative Commons Attribution-ShareAlike 4.0 International License. To view a copy of this license, visit http://creativecommons.org/licenses/by-sa/4.0/.

In order to download this game you must purchase it at or above the minimum price of $4 USD. You will get access to the following files:

Support this game at or above a special price point to receive something exclusive.

Get a free copy of this game, no questions asked.

Every $4 sale adds a new community copy to the mix.

Feel free to contact me via email (ypezion(at)gmail(dot)com) if you want to get a free copy (or if you have any concerns, questions, or inquiries regarding my games and works).

KALIWANAGAN by Secession Cycles is a minimalist cyberpunk TTRPG that uses irregular D7s. It is amazing how much is achieved with such simplistic design. A living, breathing world is described in a mere few sentences, and the whole thing reads like poetry.

Thanks for checking out this game! I really appreciate it!

Kaliwanagan is a stylish noir rpg with both osr simplicity and crunch and pbta flexibility.

It's 4 pages, with an extremely stark and direct layout. There's no pictures and no cover, but Kaliwanagan makes this work, focusing all of your attention on the game mechanics themselves.

And those mechanics are good.

Kaliwanagan uses a 2d7 system, which is weird, but it's also very easy to learn and has some cool flourishes. For example, you have three HP tracks: Health, Hearth, and Help. Health is your physical hardiness, Hearth is your willpower, and Help is your resources and support. Letting any track drop to zero is bad and can be ultimately lethal, so you're just as incentivized to stay in good standing with your friends as you are to stay physically healthy. This does a *really* good job of centering the supporting cast as a vital part of play, and sort of suggests Kaliwanagan games are meant to take place in cities and other population centers.

For conflict resolution, your 2d7 are rolled against a standard pbta difficulty, with anything under 10 being a complication or failure---but the game also provides a lot of alternatives to 2d7, so you're not stuck with those mechanics if you don't want to be.

As far as GM resources, there's enough sample enemies to give you an idea of how to build them, and there's a few tables to roll on for inspiration, but there isn't a canon setting. Honestly, the little bit of text about the city is intriguing, and I'd love to see a few paragraphs of information about it to help ground the game in a more specific place.

I also feel like Kaliwanagan could lean a little bit more into its cool three hp tracks system. It *does* have mechanics for social combat, but they seem to damage Hearth or Health rather than Help, and that feels like a bit of a missed opportunity.

Overall, though, Kaliwanagan is easy to learn and teach, it has some nice crunch, it innovates in cool ways, and it's hard not to recommend it. If you want a specific setting, it doesn't really deliver that, but if you want to run an old-school-feeling game set in a city, this is probably the first system I'd reach for.

Thank you so much for this review. I really appreciate it.

To clarify: HELP does not represent social support and the like. It only signifies the rations, resources, and supplies that you have in order to stay alive. That is why I also implemented the "use HELP to heal" kind of thing.

I hope that it helps.

Oh, I misread it. I kind of like it representing favors and relationships, but just rations and bullets keeps it more grounded.

Please also submit this game to the #1925gamejam: https://itch.io/jam/gaming-like-its-1925

Upon second thought, Having read the documents for which I paid, I cannot see how this game connects in any way to The Great Gatsby…

It takes inspiration from its themes to create a city of decadence and crime, plus cybernetics.

Reply
Jinx the Goblin2 years ago(+1)

can you make a printer-friendly version?

Is that okay with you?

Reply
Jinx the Goblin2 years ago(+1) 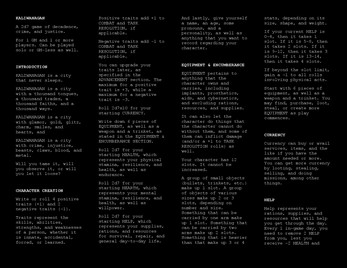 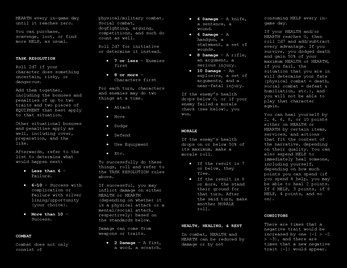 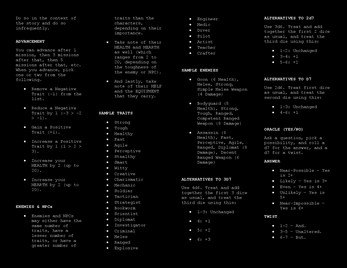 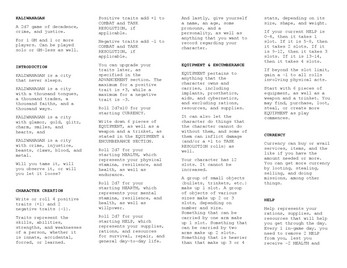 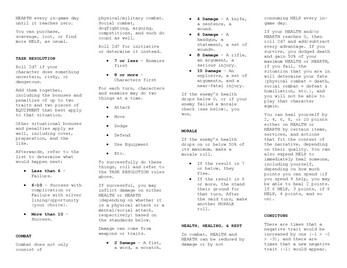 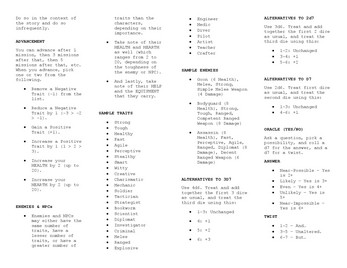